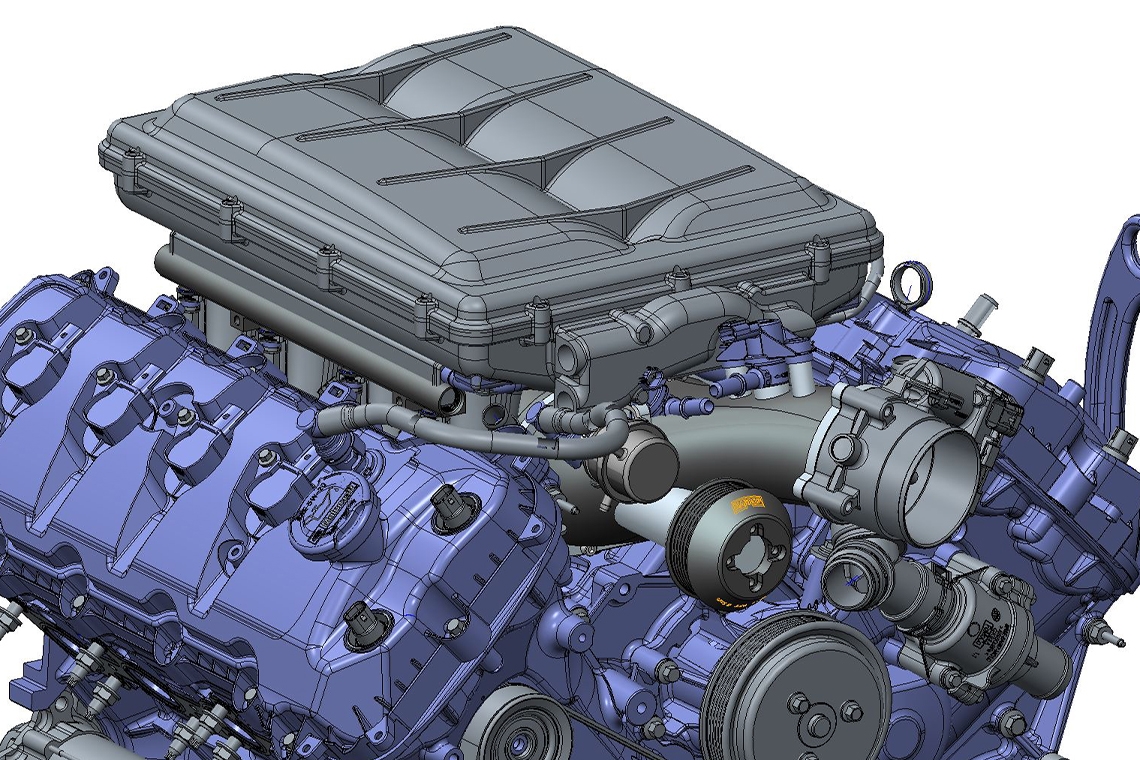 With the ever-increasing variety of supercharger size, drive ratios, belt routing, belt material and pressure ratios we will be taking a look into the design and choice of drive systems, pulleys and belt selection.

Drive systems
Most modern supercharger systems are crank driven typically with a serpentine style PK section belt. This requires many varied and sometimes complex drive installations. Below is a snapshot of some of the different drive systems for varying kits. Combinations of - All on one belt, shared accessory drives and standalone drive systems exist and all have their benefits and shortcomings. Belts - 6PK, 7PK, 8PK, 10PK, 12PK... which one?
This choice has quite a few factors to consider.
Packaging – can you fit an additional belt path
Drive load – supercharger size, speed, pressure ratio
Existing accessory belt size – in most cases there is a pre-existing serpentine belt
Belt load applied to the crank nose – the further out the more load in the crank nose


A separate drive system for the supercharger is most commonly thought of as the best solution but due to the constraints listed above it is not always achievable.


Belt Load
There are many contributing factors to belt load. Supercharger drive load, supercharger pulley diameter and engine acceleration rate are a few of the factors that contribute to the direct load applied to the belt.

Supercharger Pulley Diameter - smaller is not always the best option

It is sometimes better to think about the overall system rather than just running a 65mm or smaller supercharger pulley.
Supercharger drive load (kW) is derived from torque (Nm) and Supercharger (RPM)
100kw @ 18000 rpm translates to 53.0Nm of torque
Under a steady state load (no acceleration load)

For example, we are running the combination of a 198mm crank pulley and 70mm supercharger pulley to achieve this supercharged speed @ an engine RPM of ~6400.
In the above example with a 70mm supercharger pulley, we require ~1515 N @ the 35mm radius of the pulley (1515N of belt load) to drive the system. If we were to change the pulley configuration to a 233.6mm crank pulley and an 82.6mm supercharger pulley for the same drive ratio of 2.829 the number work out as below. The same 100kW @ 18000 rpm and 53.0Nm of torque now equals ~1284 N @ the 41.3mm pulley radius. A reduction of ~231N in belt load for the same supercharger speed and pressure ratio. Not only a reduction in belt load but an increased belt wrap, more contact belt area and a larger wrap radius. All adding up to a reduction in slip and increase in belt life.

Adding to this is the maximum acceleration rate of the engine. These angular acceleration rates (radian/sec) when combined with the moment of inertia (kg/m2) of the rotating components in the supercharger add a substantial load to the drive system.

Belt Types
The most commonly found accessory drive system in modern automotive engine applications is the PK profile serpentine belt.
Given that the PK belt is a commonly used item and found in almost all modern applications the belt manufactures a constantly developing new compounds and fibre reinforcements to make these belts stronger, more durable and resistant to slip.

PK vs. Tooth belts
Almost everyone is familiar with the large tooth belts used on top fuel, alcohol, etc. drag engines. The positive drive of these belts offers huge load carrying capacity along with the familiar noise of a toothed belt drive.
Although a great option to remove belt slip, they have the downfalls in a supercharger system intended for many 100’s or 1000’s of kilometres of road or racing use. Due to the direct drive nature of a tooth belt they are great at transmitting all of the crank shock loading (in both acceleration and deceleration) and firing frequencies to the supercharger. This, over time, can damage some of the drive components in the supercharger (gears, couplings etc). It is not recommended to use a tooth belt as the only/primary drive method in a TVS supercharger system.  You may find on our and other kits in the marketplace the use of a tooth belt as a transfer drive from a jackshaft to the supercharger, this is typically the secondary drive to the supercharger and the primary drive remains a PK style system.

Dynamic tensioners are recommended for use with PK style drive systems. You may be able to apply a massive static load with a manual tensioner but the dynamic tensioner is the best option for a system that is going to see many road/racing km’s. They have a few functions, maintain an acceptable load on the belt at all times through the belt life, have enough travel to take up slack caused by load on acceleration and deceleration of the system.